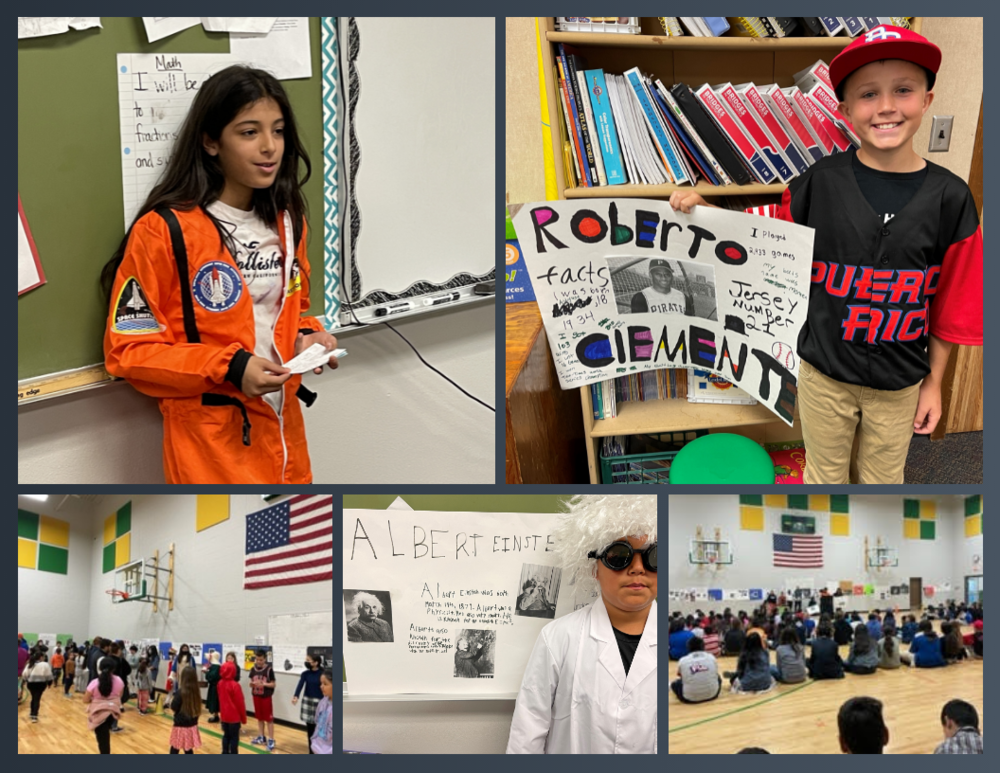 The annual tradition of the Fifth Grade Wax Museum happened this week at McNary. This project is a favorite of many students and teachers. The concept is that fifth grade students choose a historical figure, do research about the person, dress up as the person and then “become” that person to present to the class. After that, all the fifth graders gather so other students can see them.

On Tuesday, May 17th, several students presented their characters. Kaedyn was Roberto Clemente, a professional baseball player from Puerto Rico. Dressed in a baseball jersey with Clemente’s name emblazoned on the back, Kaedyn talked about Clemente’s teams, record and sports accomplishments. Then he talked about Clemente’s charity work in Latin American and Caribbean countries during the off seasons, when he would deliver baseball equipment and food to those in need. Kaedyn recited a quote from Clemente, “If you have a chance to accomplish something that will make things better for people coming behind you, and you don’t do that, you are wasting your time on this earth.”

Another 5th Grader, Nevaeh, assumed the character of Dr. Ellen Ochoa, a NASA astronaut who was the first Hispanic woman to go to space in 1993. She was also the Johnson Space Center’s first Hispanic director and its second female director. Nevaeh was dressed in a space jumpsuit to give her presentation in front of the class. “It’s really cool how she is so good at math, physics and engineering and that she is also a musician,” Nevaeh said.

Student RJ was Albert Einstein for his Wax Museum figure and explained that he was the most influential physicist of the 20th century, but left school at the age of 16. RJ said he chose Einstein because he liked math and math is also his favorite subject.

During Kaedyn’s presentation, his mom, Kaeli, was able to visit the classroom and listen to his speech. She said she didn’t really help her son with this project, but she did surprise him by ordering the baseball jersey for him to wear. Kaeli said it was amazing to see him present his work and she thinks Kaedyn researching Clemente made him “realize it takes hard work to get to a great place in life, it’s not going to just come to you.”

The school-wide Wax Museum was on Friday, May 20th. Fifth grade teacher Tim Young said “the parents and teachers around the school were so thankful that the Wax Museum was back after not seeing it for three years. It's an event where the educators can come together and celebrate the growth and success of the students.”